White Spots on the Skin, What Could They Be?

Dark spots usually get the most attention in dermatology, especially because of the concern for melanoma. Well what about white spots? Should they be of concern?

Today's blog post will review some of the more common white spots I get asked about as a board-certified dermatologist and what I suggest.

A special thank you to Detroit's own Fox 2 anchor Lee Thomas (pictured above) for helping to educate the community about vitiligo.

What can cause this? Any condition that irritates or inflames the skin, such as eczema, seborrheic dermatitis, psoriasis, or traumatic injuries to the skin like cuts or burns. When the skin is injured, irritated, or inflamed, it will heal in one of two ways, become dark or light. The light discoloration is what is referred to as post- ("after") inflammatory hypo- ("under") pigmentation. The discoloration can take several months to resolve. Very rarely is it permanent.

Protect these areas from sun exposure at all times by wearing sunscreen with SPF 30 or above and protective clothing. Continue the sun protection even after it resolves.

Little white dots that are sprinkled along the skin in sun exposed areas. We in dermatology really don't understand the exact mechanism of how they are formed. Hence the name, idiopathic ("unknown") guttate ("resembling a drop") hypo- ("under") melanosis ("disorder of pigment").

They are usually associated with sun exposure and sun damage. And to prevent getting more, sunscreen and protective clothing is the way to go.

These white spots will not resolve on their own. And they are very difficult to treat without discoloring the surrounding skin, but they cause no harm to the body to keep them.

A rash that is a collection of light spots scattered on the neck, chest, back, and or arms in a "Christmas tree" pattern. The yeast responsible for the rash temporarily causes pigment to drop out of the skin that can persist even after the rash is treated and the yeast are no longer in its active state to cause irritation and inflammation.

Active tinea versicolor can sometimes resolve with over-the-counter (OTC) dandruff shampoos that contain zinc or selenium sulfide, like Selsun Blue or Head and Shoulders. But, there are also prescriptions shampoos and oral anti-fungals options if OTC's don't work.

The white spots that persist even after the yeast is treated will not easily tan. Only the unaffected skin around them will, making the hypopigmented spots that much more noticeable. Luckily the skin will repigment over time. Patience and sun protection is the key.

An autoimmune condition in which antibodies attack and destroy pigmented producing cells in the skin, called melanocytes, leading to white patches on the skin. Development of vitiligo is unpredictable and location and extent of involvement will vary from person to person. Not only can vitiligo cause loss of pigment in the skin, but also the hair.

There are many options for treating vitiligo, but treatment must be sought after sooner than later so that the window of opportunity to gain back the pigment is not missed.

A light patch of skin that is present at birth and remains the same throughout life. Unlike vitiligo, these are not completely white. Achromic ("colorless") nevus ("birthmark or mole"), or nevus depigmentosus, can be one single spot, involve an entire section of the skin, or form a linear pattern.

Treatment is not necessary.

This is a light ring or halo around a mole. This is essentially the body's way of trying to cause a mole to regress, or leave the skin because it recognizes that mole as being foreign. When would the body think a mole is foreign? Sometimes after the mole is accidentally injured or sunburned.

Halo nevi can be seen in healthy young children or adults. Most often they are nothing to be concerned about. If anything, it means the immune system is robust and working overtime. The mole at which the halo is centered around can eventually disappear while the skin returns to a normal color.

In older adults, a dermatologist will perform full body skin examinations to ensure that the halo nevus is not occurring due to a melanoma elsewhere on the body.

The white skin of a halo nevus can burn easily and therefore sunscreen and protective clothing must be warn.

Have white spots that you want evaluated? Call 313.338.8007 or request an appointment online today.

Love and Look at the Skin You're In

Nutricosmetics: The Science of Eating for Healthier Skin 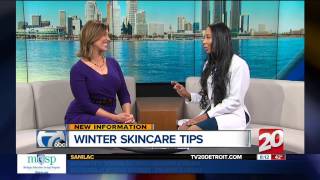 Watch it Now: CSSC on WXYZ-TV 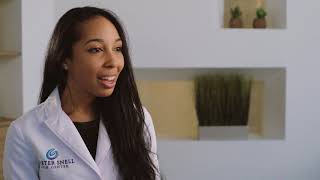 'Detroit is home, Detroit does not need to be fixed': One dermatologist's reason why for

White Spots on the Skin, What Could They Be?

Love and Look at the Skin You're In

Protection For Fun in the Sun